Recently Herman was interviewed by Georgeta Negruni (previous photography curator at Prado in Madrid). Here is the article as published by GIGARTE

We discovered Herman Van Bon through the international exhibition project called “Enredadas“, who´s aim is to break frontier of time and space and hold exhibitions, in collaboration with InSEA-UNESCO and other prestigious institutions, all over the world at the same time in order to promote contemporary artists, art education and social awareness.

Who is this extraordinary photographer?

Herman Van Bon is a fine art photographer originally from Netherlands that currently lives in Napier, South Africa. He covers topics from landscapes to portraits and has an exquisite eye for detail that makes his photographs transcend the immediate exploring metaphors of ancestral worlds.
His creation is joining the earthly with the celestial with a splendid poetic touch that transforms his photographs into magical universes that captivate viewers´ eyes and emotions.
He has the heart of a poet something reflected in his haikus and how he deals with his artistic inquisitiveness mixing different media graphic tools to get to beautiful imaginary photographs.

Let´s know more about him:
• Who is Herman Van Bon behind the photographer´s facet and how is influencing your artistic work?
I was born in the small town of Beneden-Leeuwen between the two rivers Maas and Waal. It’s a small world out there; flat and always green. At a young age I was exploring the area between the dikes on a bike and once a year with the whole family to the city to buy clothes. I always wanted to go beyond the barriers; exploring the whole world. That chance came later as a freelance (photo-) journalist traveling the globe covering the world of industrial automation, the offshore industry, logistics and other industry related subjects like shipping and shipbuilding. In between I designed and builded my own house and in 1998 I married the love of my life. One year later, after a short trip to South Africa Yvonne and I decided to move on. In January 2000 we bought a property in South Africa and 4 months later I sold my house in the Netherlands and started a new life in the old Dutch colony. In the meantime we moved twice and since two years we live in a small town 2 hours’ drive from Cape Town.
• What drove you to move to South Africa?
Space! The Netherlands is a wonderful country but, inherent to the dynamics of an overcrowded population; over-regulated. Most people can live with that (it also has many advantages) but I don’t like to be caged. In 1996 I stood on a mountain near Los Alamos in the USA and overseeing my own country enclosed by mountain tips at the horizon. It was an experience of space with pure natural sounds undisturbed by manmade noises. There I said to myself “Sooner or later I will move out of the lowlands and find space where there is space in as many aspects as possible”. It might sound strange to outsiders but South Africa offers me the space I need for my creative processes.
• Your work finds inspiration in the soul and culture of Africa. What gets your attention the most?

We live in Napier, the heart of the Overberg region in the Western Cape. The landscapes are fascinating with ever changing sky colours with, on Napier Mountain, a view reaching the ocean in the South and mountains in the North. It’s pure magic. And every day is a different day. Another aspect of my work is the people; there are many different cultures in South Africa and they are all fascinating in their own rights.
• You have such a magical and beautiful way to deal with the photography that sometimes you get very close to abstract painting or drawing. How is your creative process from the idea to the final work?

It’s not easy for it’s mostly trial and error. I figured out that of every 250 or so shots there is one good picture. ‘African Feet’ for example is one of those. ‘The Shepherd of Stanford’ took 14 days to get the shot I wanted. The owner of the sheep farm asked me to check on his shepherd while he and his wife went on a holiday and Koos, the shepherd, needed to have a daily talk. So, I went to Koos day after day and we really got a good contact and yes I could photograph him.

Altogether over 600 shots and only one outstanding. When I take a picture I try to visualise how the end result will look like. A picture has to tell its own story; show its own soul. It’s relatively easy to take a picture as is but to shoot a picture with magic in it and to emphasise it behind the computer is another story.
• You are a family of artists. Your wife, Yvonne de Wit, is a jewellery artist.
Do you collaborate in the creation process? or Do you find inspiration in each other´s work?

Yes. We do collaborate. Yvonne is an artist. She designs and makes her own jewellery of South African Sterling Silver combined with natural bonded soil particles of the African Earth. There is an enormous variety of earth colours; she is very much inspired by that. In my photography I use different composition rules; the least the known ‘rule of thirds’. I’m more inspired by the ‘Golden Ratios’ of Fibonacci and Le Corbusier. Rules are there to be broken. You also find that back in her jewellery; original designs and unusual material combinations.

• You describe your work as: “Associations that lead to the awakening of the archetypes part of the universal heritage of humankind; born in prehistoric times.

I am a very complex person and this complexity reflects in my work in the sense that I produce landscapes, haikus, photo-graphic mixed media and imaginary photography next to abstract and portrait photography. Occasionally I paint or apply ‘fluidization’ to my pictures. Sometimes – more often than not – it all comes together.”

What are the archetypes you see blossoming into todays’ society and what interests you most? 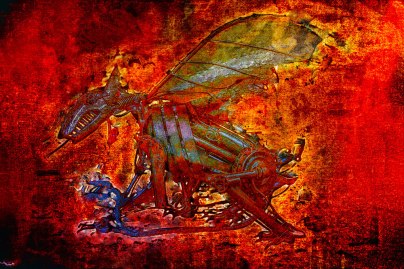 Archetypes are eternal. It’s about ‘good’ and ‘evil’. The archetype reflects the alter ego. History always repeats itself; it’s an eternal cycle; sometimes one gets confused by what is ‘good’ and what is ‘evil’; just look into religious inspired wars. South Africa also has it’s share in it and the scars it brought into the majority of people are still deep. This is what interests me at this stage.

• What are working on right now and what is your next world to conquer (your future projects)?
I’m at the moment engaged in documenting different cultures; making portraits of people in their own environment. In our town there is at the moment a movement which tries to engage the different cultures with each other. One of the activities at the moment are the rehearsals for the local theatre production of Peter Pan after a book of the Scottish writer J. Barrie. Interesting to see what happens. South Africa can be a rainbow nation; especially when politics are not involved. 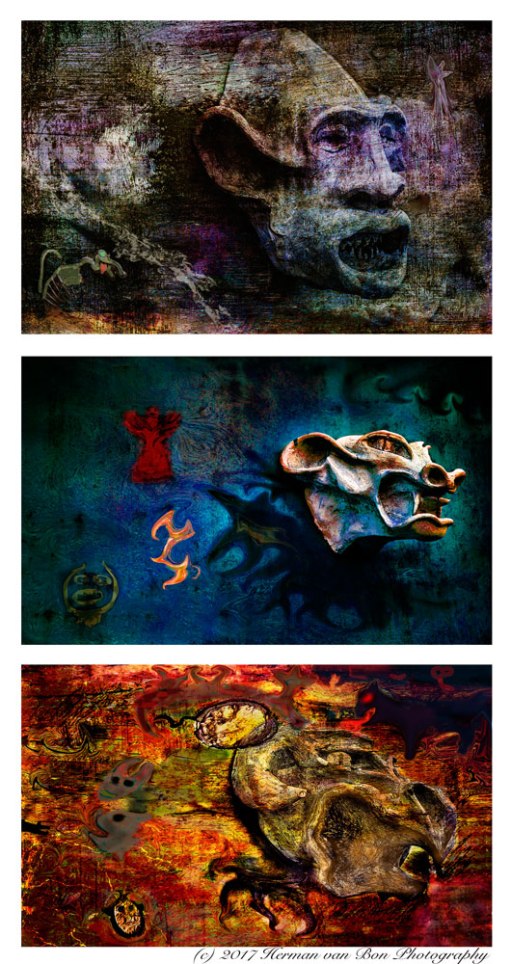 Enredadas isthe International Project born in Spain, today promoted by the Esibit.com platform, and officially became part of the events dedicated to the International Week of Artistic Education promoted by UNESCO. The project, supported by the InSEA -International Society for Education through Art- elevates art to a relational tool to connect to the world and get in touch with it even in the absence of words that have the same sound.

With Enredadas, in fact, art becomes the universal language that professional artists, teachers and students of national and international art schools are invited to interpret through the participation in one or more of the open calls who “shout” the urgency of reflections on the social role of artistic production in the world.

2 thoughts on “The interview”

" I like to explore the possibilities and limits of digital art, I just let it flow to see where it can go, sometimes the end result appears quickly, sometimes the creative process takes months and other times  the creation dies in its own beauty".  View all posts by Herman van Bon Photography